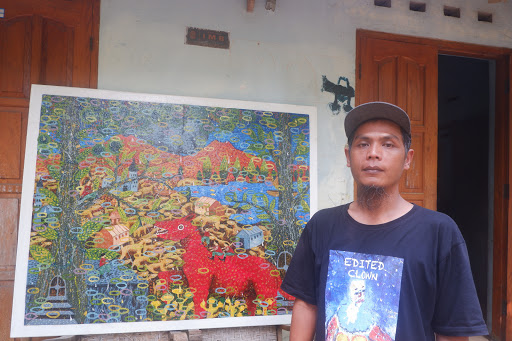 “Art is my way to preserve memory ,express my feelings, and convey powerful messages to my audience”

About the Artist:
Godek Mintorogo is an Indonesian artist, raised in a small village in Yogyakarta. Godek started to doodle early in life. For Godek, art is a way to enunciate any issue, expression or moment. He also views the process of creating artworks, and art itself, as a way to interact with his audience. Godek paints fables, through his use of animal symbolism to depict human hypocrisy. His artworks, much like fables have deep meanings and a lesson behind it.

Godek’s “Remember” series depicts public figures such as Frida Kahlo, Van Gogh, Salvador Dali, as well as legendary Indonesian artists. The series commemorates the values, wisdom and the life lessons Godek has received from the artists who inspire him.

Fun Fact: Godek also does digital art which are applied to screen printing and advertising.