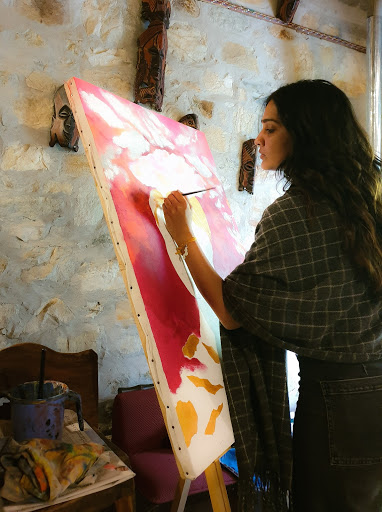 About the Artist - The First Step into the World of Art and Self-Expression
Hemangini Maharaul is a proponent of the ‘Expressionist
Movement School.’ Her foray into the creative world as an adolescent
teenager, stemmed from a desire to express her views on gender related
issues. Raised in a liberal Rajput family in Bharuch, a small town in India,
Hemangini was born to extremely supportive parents. Her family believed in
treating women on par with men. Hemangini’s folks encouraged her to pursue
her dreams and ambitions, just as they endorsed the goals and hopes of her
male counterparts.
Given the progressive environment she was raised in, it was natural for
Hemangini to grow up believing that life’s goals and aspirations and the
realization of these was not a gender- based privilege. Her teenage mind,
therefore, had trouble grappling the realities that women outside her
household faced. The ecosystem outside her home, especially the smaller
sections of her community, portrayed a different reality - a reality that was
characterized by inadequate structures and processes to support women and
provide equal opportunities to them.
Typical of a Rajput family, Hemangini’s kindred inculcated in their children
fierce values. Values that encouraged their lot to stand up for the weak, the
less empowered, especially the minorities. As fundamentally right as she knew
this value to be, the perceptive teenage realized earlier on, that this was a
difficult task for a woman in a male-dominated society. She also knew that as
difficult as the task was, it wasn’t an entirely impossible mission. She realized that helping the
weaker sections of the society was possible and sustainable in the long run, if
one could find out the right way to do it. And being the creative individual
that she always was, the right way for Hemangini meant finding the ‘right
channel’. It meant employing the ‘right platform,’ that would legitimately
allow her to express her views on societal issues that impacted her.
It was during this phase of introspection and reasoning that Hemangini’s
family relocated to Malawi, a stunning landlocked country in Africa. When
Hemangini arrived in Malawi, the idea of the ‘right channel,’ the ‘right
platform’ was pretty much in its infancy.
The exposure to a completely different nation with its contrasting
cultures, traditions, cuisines, festivals and local communities, enhanced
Hemangini’s personal growth and transformation and fine-tuned her creative
sensibilities. Although the new environment helped refine her world views,
enlarged her artistic canvas and transformed her into a ‘world citizen,’
another matter was brewing in the aspiring artist’s mind. In Malawi, among
certain segments of its society, she witnessed a scenario similar to what she
had seen back home. A system that was marked by a lack of structures and
processes to support women and provide equal opportunities for them. She
knew then, that it was about time. The expressionist and nascent artist in her
had to figure out what that ‘right channel’ was. The right platform’ which
would allow her to express her sentiments towards the treatment meted out
to the weaker sections of the society.
The search ultimately ended when the would-be artist came back to India to
acquire a formal diploma in visual arts. For it was through this academic
medium, that Hemangini finally discovered her ‘right channel’, her ‘right
platform’. As an art student, she skillfully learnt to leverage the potential of
visual arts and use it as a voice of expression. A voice that conveyed her
opinions on subjects she felt deeply about. A fine testament to this was her
first solo exhibition as a student which was titled, ‘The Trepidation of Women’.
The fierce production, blending feminine themes in varying artistic styles,
examined the gender-based evils of society. The encouraging response of her
audience helped Hemangini comprehend the impact that art has always had
in the world with respect to ‘Expression of Emotion.’ It was also at this
juncture, she realized the potential art has as a vehicle to raise awareness on
issues that affect our lives. Right then she decided she wanted more. That she
wanted to create more art and contribute more of it to the world. A formal
degree in fine arts from Pune followed and soon after the world welcomed a new
artist.