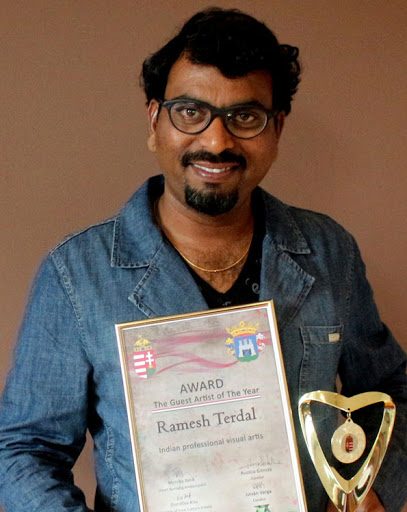 Ramesh Terdal hails from Gadag in the Northern part of Karnataka, India. He has carved his name as an artist of creative essence through his vivid impressions on canvas. Ramesh has been exhibiting his artworks in India and abroad and has achieved a remarkable recognition in his field. As an artist he has adopted a strong visual language.

His early works depicted strong human feelings - the faces, portraits and figures engaged in a dialogue that is uniquely creative and denoted the artist’s own world of images. At present, Ramesh has inclined towards more abstract art forms and has become more of an abstract artist as against strong figurative forms. Now, his canvas has forms and images which are definable yet unfathomable, governed by mystical and magical forms. These transcendental forms emerge as meaningful images, reflecting the artist’s own experiences. His artworks evolved from his psyche-intuitive expressions. They are abstract in appearance yet forms of animals, birds, aquatic figures like fish, humans and other magical images emerge. They are mystical in appearance and travel from the surrealistic world giving a feel of impressionistic yet hypnagogic nature to Ramesh’s images.